Squaring the circle in eastern Syria 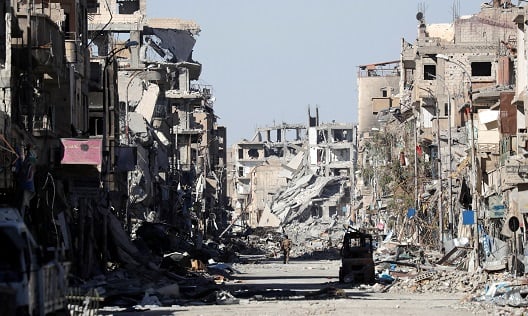 Readers of SyriaSource are all too familiar with an argument advanced in these pages for well-over two years: Daesh (ISIS) should be neutralized quickly in eastern Syria; an American-led, professional ground force coalition-of-the-willing should be assembled to pre-empt Daesh terror operations in Turkey and Western Europe and minimize Syrian civilian casualties in complex urban battle terrain; and that a post-combat stabilization plan should be drafted and implemented to keep Daesh dead, one drawing on pre-Daesh local councils and the anti-Assad Syrian opposition. The idea was to parlay the defeat of Daesh into a stable, protected eastern Syria where humanitarian aid could be expedited and reconstruction begun, and to exclude the cause of terrorism and state failure in Syria – the Assad regime – from the area.

For an operationally challenged Obama administration indifferent to civilian slaughter, eager to accommodate Iran, those recommendations were a bridge too far. For the better part of three years a “partner force” dominated by the Kurdish PYD – an affiliate of the PKK terrorist group – has been the ground combat component of the American-led anti-Daesh coalition. It has been a leisurely campaign: one that gave Daesh time to plan and conduct multiple massacres in various European venues. Having inherited from its predecessor the policy equivalent of a soup sandwich, the Trump administration – committed to obstructing Iran’s march to regional hegemony – accelerated the anti-Daesh battle, but must now think through what to do about eastern Syria with the military defeat of Daesh seemingly near.

If the BBC’s recent reporting of Daesh terrorists being bused out of a ruined Raqqa is to be believed, early returns on the significance of defeating Daesh are not promising. Still, the administration is trying to hold the Euphrates River as the “deconfliction line” over which Iranian-led Shiite foreign fighters and what is left of the Assad regime’s army should not pass. But what about the stabilization and governance of Syria east of the Euphrates: parts of Aleppo, Raqqa, and Deir al-Zor provinces, and Hassakeh province? Having been part of an Obama administration that resolutely refused to help shape a post-Daesh governing authority, the presidential special envoy for the global coalition to counter Daesh (Mr. Brett McGurk) now complains “We do not have a government to work with.”

Counter-Daesh military operations in Syria have focused mainly on Raqqa and Deir al-Zor provinces. These areas are overwhelmingly Arab. Even though the Kurdish PYD has been subsumed into the broader “Syrian Democratic Forces” – the anti-Daesh ground force component supplemented by thousands of non-Kurdish auxiliaries – there is no doubt that the PYD is in charge. If the American “plan” is to permit the SDF to establish municipal and town councils in non-Kurdish areas, the stage will be set for popular disaffection sure to be exploited by the Assad regime, its enablers, and other extremists. No one would mistake SDF occupation for anything other than what it is: an extension of PYD rule far beyond Kurdish-populated areas of Syria.

The role of the PYD in the glacial campaign against Daesh is, of course, one of the principal irritants in a deteriorating bilateral relationship between two NATO allies: Turkey and the United States. Making it so was entirely gratuitous: the decision of Washington to wage war slowly and on the cheap against a murderous criminal band with transnational reach, taking three years to subdue a motley, multinational collection of thugs, thieves, and rapists. In the meantime, however, American military advisers on the ground came to respect the courage and capabilities of Kurdish partner forces.

Squaring the circle of Turkish-Kurdish animosity for the sake of stabilizing eastern Syria and keeping it out of the hands of the Assad regime pending a Syrian political settlement will not be easy, given the absence of deliberate post-combat stabilization planning over the past three years. Indeed, it may not be achievable. Is it worth a try? Those on opposite sides of the Kurdish-Turkish divide – those who say, “don’t abandon the Kurds” and those who prioritize “repairing relations with a NATO ally” – might find the need for a heavy diplomatic lift by the United States to be their sole point of agreement.

In the Turkish-dominated “Euphrates Shield” zone of north Aleppo Province, the Syrian Interim Government – a spinoff of the anti-Assad Syrian National Coalition – has been providing (with strong Turkish support) governance-related support to Syrian citizens. Reviews of the SIG’s effectiveness are mixed: it has many critics in opposition circles, but at least it operates inside Syria.

Washington should open discussions both with Ankara and the PYD/SDF aimed at a mutually acceptable arrangement for the interim governance of a protected eastern Syria. The goal would be for Kurdish elements of the SDF to recede to Hassakeh province, which is largely Kurdish in composition. The writ of the SIG would be extended – with Turkish assistance – to those parts of Raqqa and Deir al-Zor provinces east of the Euphrates from which Daesh has been driven. The SIG – particularly if it arrives with significant monetary resources – could (as it does in the Euphrates Shield area) work closely with local councils. And it could be supplemented with Syrian opposition figures whose roots are in eastern Syria.

The United States would, in conjunction with this effort, try to bring about a “live-and-let-live” relationship between Syrian Kurds and Ankara pending an overall political settlement in Syria: A settlement that surely would have to feature empowered local governance in the context of Syrian territorial integrity and national unity.

There are specialists in Turkish politics who will caution that any American attempt to bring Turkey into the stabilization of eastern Syria that does not involve the complete cutting of ties between Washington and Syrian Kurds will be utterly rejected by Ankara: that President Erdogan’s baseline strategy for the 2019 presidential election is to tap into Turkish nationalism by maintaining a high level of animosity with the PKK and with Syrian Kurds affiliated with it. That analysis may well be true. The question is whether Washington has the will and the wit for a diplomatic heavy lift aimed at squaring this very difficult circle. What also remains to be seen is whether the Trump administration has any more interest than did its predecessor in making the defeat of Daesh count for something in the broader battle against Iranian regional hegemony and Islamist extremism inspired by the criminality of a Syrian ruling family.