Obama’s coldness on Syria is about Iran 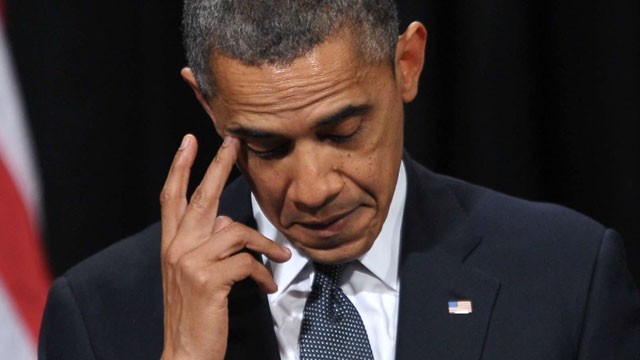 The failure of the United States and its partners to protect Syrians from the Assad regime’s barrel bombs will tarnish the legacy of Barack Obama, a president whose compassion and humanity were on display recently at the Emanuel African Methodist Episcopal Church in Charleston, South Carolina. It was a magnificent performance, one that makes Mr. Obama’s indifference toward mass murder in Syria all the more striking. Why does “never again” not apply to mass murder in Syria?One word provides the explanation: Iran. Mr. Obama and his military advisers know how to throw sand into the gears of President Bashar Assad’s mass murder machine. They know how to do it without invasion or occupation. They know how to do it with far less firepower than American aircraft used to prevent ISIS from capturing Kobani. When it comes to the Assad regime’s atrocities it is Iran that stays the president’s hand.

Mr. Obama realizes that Iran is the main external facilitator of mass murder in Syria. He understands that Tehran can make Assad stop the barrel bombs, shelve the chlorine gas and lift the starvation sieges. Yet he fears offending Iran over Syria. In October of last year he reportedly went so far as to assure Iran’s supreme leader, Ayatollah Ali Khamenei, in writing that American aircraft would not molest his client in Syria.

The president has long wanted a nuclear deal with Iran. He thinks it will, in time, change Iranian behavior. He may be right. But how many more Syrians will be slaughtered before Tehran mends its ways? Grounding Assad regime helicopters would save thousands of lives right now. Would this act of mercy impel Tehran to walk away from billions of dollars in sanctions relief?

Apparently Mr. Obama thinks so. Yet instead of making this case directly, he and his supporters employ all-or-nothing, straw man argumentation to disguise their deference to Tehran and attempt to discredit policy alternatives Iran might find objectionable.

Consider what Mr. Obama told The New Yorker’s David Remnick: “It is very difficult to imagine a scenario in which our involvement in Syria would have led to a better outcome, short of us being willing to undertake an effort in size and scope similar to what we did in Iraq. And when I hear people suggesting that somehow if we had just financed and armed the opposition earlier, that somehow Assad would be gone by now and we’d have a peaceful transition, it’s magical thinking.”

What’s magical is the president conjuring and shooting down an argument no one has made. When all of Mr. Obama’s senior national security officials recommended arming and training Syrian nationalist rebels in 2012, none characterized it as a silver bullet that would oust Assad and usher in an era of peace and brotherhood. No one makes that argument today. But without the straw man how else can Mr. Obama disguise doing nothing in deference to Iran? How else can he argue that only by doing the unthinkable – invading and occupying Syria – can he save lives and make a difference for the better?

Today the Pentagon is struggling to accomplish that which, in 2012, would have been easier and could have defended Syrians from the regime and pre-empted the rise of ISIS. But set aside the consequences of Mr. Obama’s rejecting the recommendations of Secretary of State Hillary Clinton, Defense Secretary Leon Panetta, CIA Director David Petraeus, and Chairman of the Joint Chiefs of Staff Martin Dempsey. Given the magnitude of the slaughter that took place after the massive chemical atrocity of August 2013, would no defenseless Syrian children have been saved had Washington neutralized Assad’s air force, missiles and artillery when Mr. Obama’s red line was so defiantly violated? No one then called for invasion and occupation either.

A recent encounter I had with a senior White House official updated the president’s rope-a-dope argumentation. Asked if there were nothing the United States could do to complicate the ability of the Assad regime to drop barrel bombs, the official said that the president would respond as follows: “Yes, I could neutralize the helicopters. But what if Assad then uses Scud missiles? And if the missiles are destroyed, what if he uses field artillery? How far do you want to drag me into this?”

For someone dismissive of “magical thinking,” this logic would be inadmissible absent the Iran factor. It ignores Assad’s risk-benefit calculation. It enables Mr. Obama and his people to say that all military countermeasures to Assad’s atrocities lead automatically to all-out war, and that all critics of administration policy are therefore promiscuous interventionists.

All this for the sake of camouflaging Mr. Obama’s accommodation of Iranian interests and behavior in Syria. And when all other arguments fall short the administration plays what it thinks is its trump card: If we push back against Assad in Syria, Iranian-backed militias will target American troops in Iraq. A hostage crisis is thereby declared and surrendered to pre-emptively.

Khamenei is abetting mass murder in Syria while authorizing negotiations with the Great Satan. He finds Bashar Assad useful. He also wants to get out from under international sanctions. He can, to use an American expression, walk and chew gum at the same time. The Obama administration is reluctant even to raise Syria’s humanitarian abomination with Iranian counterparts, notwithstanding the human toll and the value of Assad’s criminality in helping ISIS recruitment inside Syria and around the world. This is a mismatch for which Syrian civilians are paying a gratuitously terrible price.

Barack Obama’s moral force on display in South Carolina has been missing in the case of Syria. The human cost has been horrific. Bluffs have been called, reputations shredded, and honor sacrificed. Sadly, it is all unnecessary. It has all been for nothing.