Give Vladimir Putin his due; he realized that America was all talk 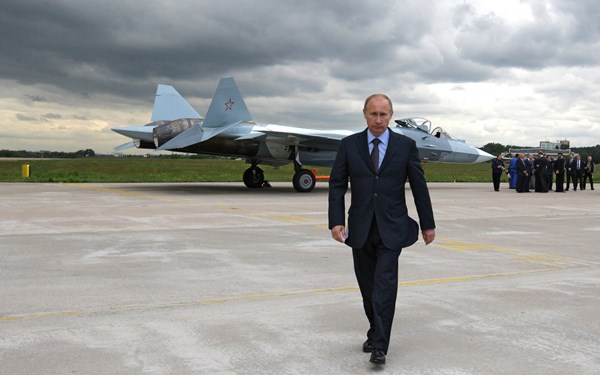 Give Russian President Vladimir Putin his due: In Crimea and now in Syria he took the measure of potential adversaries and moved decisively. Bureaucratically free of the constraints that would have restricted post-Stalin Soviet leaders and desperately in need of foreign triumphs to distract and entertain the citizenry of a dying but dangerous country, he looks for weakness, he studies carefully and pounces. The danger he poses to world peace cannot be understated. He runs the risk of cornering an American president and provoking a harsh response. But for now he is riding high.

In Syria, Putin’s behavior is particularly egregious and destructive. Yet the payoff is potentially great. Putin claims that the United States has, since 2003, been on a regime change and democratization mission. Iraq in 2003 and Libya in 2011 are his exhibits A and B. When he heard President Barack Obama tell Syria’s President Bashar Assad to step aside in August 2011 his ears perked up: There they go again; this may someday land on my doorstep if I do not stop it elsewhere.

Over time Putin realized that American talk about people stepping aside, red lines not to be crossed, calculations to be changed and the inadmissibility of mass homicide was literally only talk. He was helped to arrive at this conclusion by public remarks of American statesmen suggesting that there was, in fact, no military solution to the Syrian crisis; that even the most modest of military measures to protect Syrian civilians from the terror inflicted on them by a regime addicted to the collective punishment of civilians would lead inevitably to invasion and occupation – precisely the thing Mr. Obama believed he was elected to avoid.

Indeed, “no military solution” acquired mantra-like qualities in the West, where moral revulsion over Assad’s atrocities was operationally diluted by the hope that Syria’s neighbors – Turkey, Jordan and Lebanon – would absorb fully the outflow of terrified humanity. One could always write checks for the neighbors and publicly salute their willingness to host refugees.

In 2013 a senior European diplomat put it this way to the author of this article: “As long as the Syrian crisis stops in Turkey, Europe does not give a damn.” Indeed, Western European leaders have chanted the “no military solution” mantra without prompting by Washington. It is code for “We will do nothing to address this problem at its root.” But alas, Syria’s emptying has not stopped at Turkey’s borders.

Things got a bit messier when Daesh (ISIS) set up shop in an eastern Syrian vacuum created by the Assad regime’s survival tactics and strategic priorities. Not only did Daesh overrun a major part of Iraq in 2014, but its very presence persuaded many Syrians that, between Assad and Daesh, the country was finished. Hence the hemorrhage of humanity flowing toward Germany and Scandinavia. Led by the United States, a coalition was formed to conduct a desultory air campaign against Daesh in Syria. Yet any Western appetite to react militarily to the depredations of Daesh had no counterpart with regard to a regime that has killed over 180,000 civilians, driven over 4 million into exile, besieged some 600,000 Syrians and imprisoned tens of thousands of people – subjecting them to torture, starvation and sexual abuse.

Putin studied all of this and went to work. At the end of September 2015 he intervened militarily in Syria, saying he (unlike the West) would destroy Daesh. But the actual operations of air assets sent by Moscow to Syria revealed the Russian president’s true motive. Like his client, Assad, his real target was not Daesh but nationalist Syrian rebels opposed both to Assad and Daesh. Indeed, the people targeted by Russia – including unarmed civilians – were the same people who were on the Daesh bullseye. Vladimir Putin had arrived at a military solution to the only aspect of the Syrian crisis he deemed worth solving: preserving Assad’s in power in at least part of Syria.

Since the beginning of the crisis in March 2011, Assad has claimed that his opponents are all terrorists. In this respect the rise of Daesh has been a gift that keeps on giving. Assad argues, in effect, you may think I’m bad and you may be right, but the crew over there that burns people alive and recruits (courtesy of my atrocities) from around the world is worse. Once the Russians, the Iranians and I get rid of the other alternatives, what will it be? Me or “Caliph” Abu Bakr al-Baghdadi?

Putin has harnessed the Assad argument to his putative goal of defeating the supposed regime-change mission in Syria. Alarmed by regime military reverses in the summer of 2015 – reverses that Iranian-assembled foreign fighters could not help Assad stem – Putin deployed major combat air assets. And he embarked on a campaign designed to help the Assad regime and Daesh – yes, Daesh – destroy the armed and political alternatives to both.

What Putin wants – and ideally during the incumbency of the man who told his client to step aside – is for Washington and the West to face a binary choice: Bashar the Barrel Bomber or Baghdadi the False Caliph. He knows full well, having observed the West’s pitiful performance in Syria for nearly five years, that his regime-change thesis is a canard. This is about telling the Russian people and the world that Russia is back as a great power; that when Russia supports someone – even someone as loathsome as Assad – Russia prevails. Putin is supremely confident that, when it comes down to Assad versus Daesh, the West will swallow deeply and go with Assad.

Washington has unintentionally but effectively facilitated Putin’s excellent adventure in Syria. It has reminded Putin that there is no military solution in Syria; that a costly quagmire awaits him and that prolonging the tenure of Assad only plays into the hands of Daesh. As it did once before – in 2013, when Iran summoned its Lebanese militia (Hezbollah) to rescue Assad – the administration implored Moscow to co-sponsor a diplomatic process to bring peace to Syria. No problem here for Russia. It needed time and diplomatic cover to pursue and accomplish its political-military objective in Syria. It still does.

Now, as Aleppo falls under siege with tens of thousands of people on the road toward Turkey – NATO’s southern flank – Washington feels bewildered about the gap between Russian words and deeds. Russia, after all, signed up to a peace process entailing cease-fires, the lifting of sieges, a political transition, a new constitution and eventually elections. Moscow even voted for United Nations Security Council Resolution 2254 memorializing and canonizing all of these solemn undertakings. Why, we have the solemn verbal assurances of Russian Foreign Minister Sergey Lavrov that these commitments are real. What are the Russians doing? Why would they cause the Geneva peace conference to be suspended? Don’t they know that Assad stepping aside is the practical precondition to a united Syrian front against Daesh, our common enemy? Surely there is a misunderstanding here.

To read White House and State Department press briefing transcripts reflecting continued administration credulity even after Washington’s pocket has been picked is to invite wonder and disbelief. One may perhaps assume that Barack Obama wishes, based on his fear of the slippery slope, to maintain his spotless record of having protected not one single Syrian inside Syria from the mass homicide campaign conducted by Assad and facilitated by Iran and Russia.

One is also free to suspect that the administration sees the diplomatic process it has contrived as a bridge over Syria’s troubled water, one stretching from now until noon, Jan. 20, 2017 (when Obama leaves office). One may conclude that the people of Syria – at least with respect to the atrocities of Assad and his enablers – are wholly on their own. And there may not be enough money in all of the European Union countries to pay Turkey to absorb the coming tsunami of human flight. A Syria effectively partitioned between Assad and Daesh will, over time, substantially empty itself.

Nearly five years into this crisis it is clear that what happens in Syria does not stay there. Putin is a dangerous and destabilizing presence on the world stage. Permitting him to have his way in Syria is to throw kerosene on the fire. It may be that if anything at all can be salvaged from Syria it is world peace. Unless Vladimir Putin reverses course now, the free ride he is enjoying in Syria should come crashing down, and soon.