Who’s in charge now in Syria? 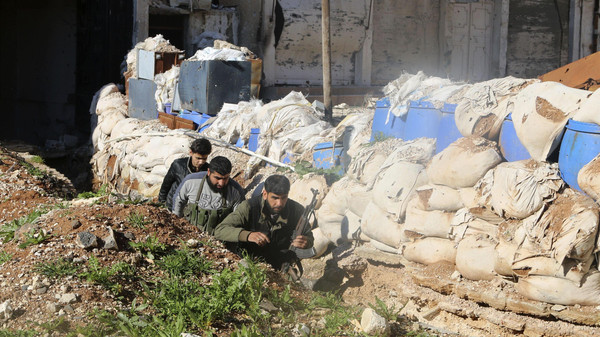 For a fleeting moment on Aug. 10, the high wall of media apathy over the war in eastern Syria and its connection to American national security interests was breached. A reporter asked an American military spokesman about the anti-terror implications of permitting Iranian-led, Shiite foreign fighters and armed elements of the Assad regime into Sunni eastern Syria to take over from Daesh (ISIS) in places like Deir al-Zor. Might Daesh eventually resurrect itself in areas taken over by bad actors like Iran and Assad? The spokesman’s response: “That is not an immediate concern of ours, but I don’t know if we have looked into that more deeply. Again, I told you where our focus is now and where our efforts are concentrated.” That focus and those efforts are on the city of Raqqa and the killing of Daesh: full stop.

One could easily gather from this exchange that the United States is indifferent to the post-Daesh status of eastern Syria. Once Daesh is beaten it matters not if the conditions that gave rise to transnational terror in the neighborhood are re-established; this time with the volatile addition of undisciplined foreign fighters with a lethal sectarian agenda. If the impression of indifference is not accurate, one wonders who is authorizing such statements.

Since late 2014, when forces of the self-proclaimed Daesh caliphate besieged the Syrian-Kurdish town of Kobani, American armed forces have sought to degrade and destroy the terror organization. They have tried to do so with air assaults and Kurdish-led militiamen (with American advisers) on the ground. The Kurdish-American ground-air campaign has been slow to unfold and limited in geographical reach.

One of the noteworthy features of the six-year struggle for Syria is that its dire consequences have not been containable. The Assad regime – with the full support of Iran and Russia – has sought to survive by militarizing and sectarianizing the uprising and by making civilians the targets for collective punishment and mass homicide. This has produced a humanitarian catastrophe spilling over to Sweden and beyond. And by emptying its prisons of Islamist extremists, the regime has cynically – but successfully – polluted the ranks of those who oppose it. A Syrian branch of Al-Qaeda and Daesh – the wayward son of Al-Qaeda in Iraq, an organization supported by the Assad regime for years –have been the transnational terror consequences of the regime’s state terror.

It is, therefore, fair, pertinent and important that someone ask about the implications of permitting an American-led effort against Daesh – one approaching its third year – to end with eastern Syria largely in the hands of sectarian extremists and mass murderers. The attitude of the Tampa-based United States Central Command (CENTCOM) seems to be one of, “Interesting question, but not our job. We’re here to help the Kurdish-led ‘Syrian Democratic Forces’ beat ISIS. Once we do that, it’s ‘mission accomplished.’”

No doubt defeating Daesh in Syria is important. It should have been done long ago, even before the ersatz caliphate mounted mass atrocities in Turkey, France, and Belgium. It should have been accomplished by a professional ground force coalition-of-the-willing led by the United States. A Syrian opposition recognized by Washington in December 2012 as the “legitimate representative of the Syrian people” should have been tasked with preparing for post-Daesh governance, and assisted to that end by an American-organized, multinational effort. An all-Syrian stabilization force should have been built in a protected eastern Syria to pacify the area, facilitate humanitarian aid, and spur reconstruction.

The selected alternative has been a desultory air-ground campaign relying largely on militiamen from an organization linked to the terrorist Kurdistan Workers’ Party (PKK). Reliance on Kurds has limited the ground reach of the fight against Daesh in Syria. It has fueled a bilateral dispute between two NATO allies (Turkey and the U.S.). It has placed the liberation of Syrian civilians in the hands of militiamen. And now it has opened the door to eastern Syria being occupied by lawless elements, who will surely inspire resistance upon which other extremists will seek to capitalize.

Both the Trump administration and its predecessor have clearly acknowledged the link between Assad regime performance and Syria’s status as a host for terrorists. The Trump administration has been more direct than its predecessor about the role of Iran in destroying the Syrian state to preserve a predatory, but subservient regime. And Secretary of State Rex Tillerson has been very straightforward about the inadmissibility of Bashar Assad and his entourage being part of Syria’s political future. Yet none of this seems to be the “concern” of those charged with erasing Daesh.

Weeks ago, this writer tried to draw attention to CENTCOM’s public invitation to Iran and the Assad regime to insert armed forces into eastern Syria, provided they focus their fire on Daesh. This invitation seemed contrary to the stated policy of Washington. The latest statement seems to confirm Tampa’s view that anyone willing to shoot at Daesh is welcome to set up shop, even if the nature of the business to be conducted is sure to attract the wrong kinds of customers.

The Trump administration certainly has the right to double-down on the policies of its predecessor and help install Iran as Syria’s suzerain, with the Assad entourage sifting through the country’s ruins for spoils and setting the stage for successive waves and varieties of extremism arising in response. It can endorse the policy lead of a unified combatant command by explicitly authorizing CENTCOM to welcome Iran and the regime to eastern Syria to replace Daesh as the region’s criminals-in-residence. Or it can try to figure out – even at this late date – how to prevent Iran and Assad doing their worst for the security of the United States, its allies, and its partners. Step one might involve public information discipline.

Indeed, whatever the administration elects to do, it should exercise policy command. No one wearing an American military uniform should be put in the position of seeming to endorse the subjugation of Syrians to Iran and Assad while trying to explain the limits of a narrow military mission. Killing Daesh is a laudable goal. Doing it without regard to the terror implications of Iran and Assad taking over eastern Syria is a prelude to policy failure. If the spokesman for CENTCOM is speaking for the United States, this is precisely where we are headed.