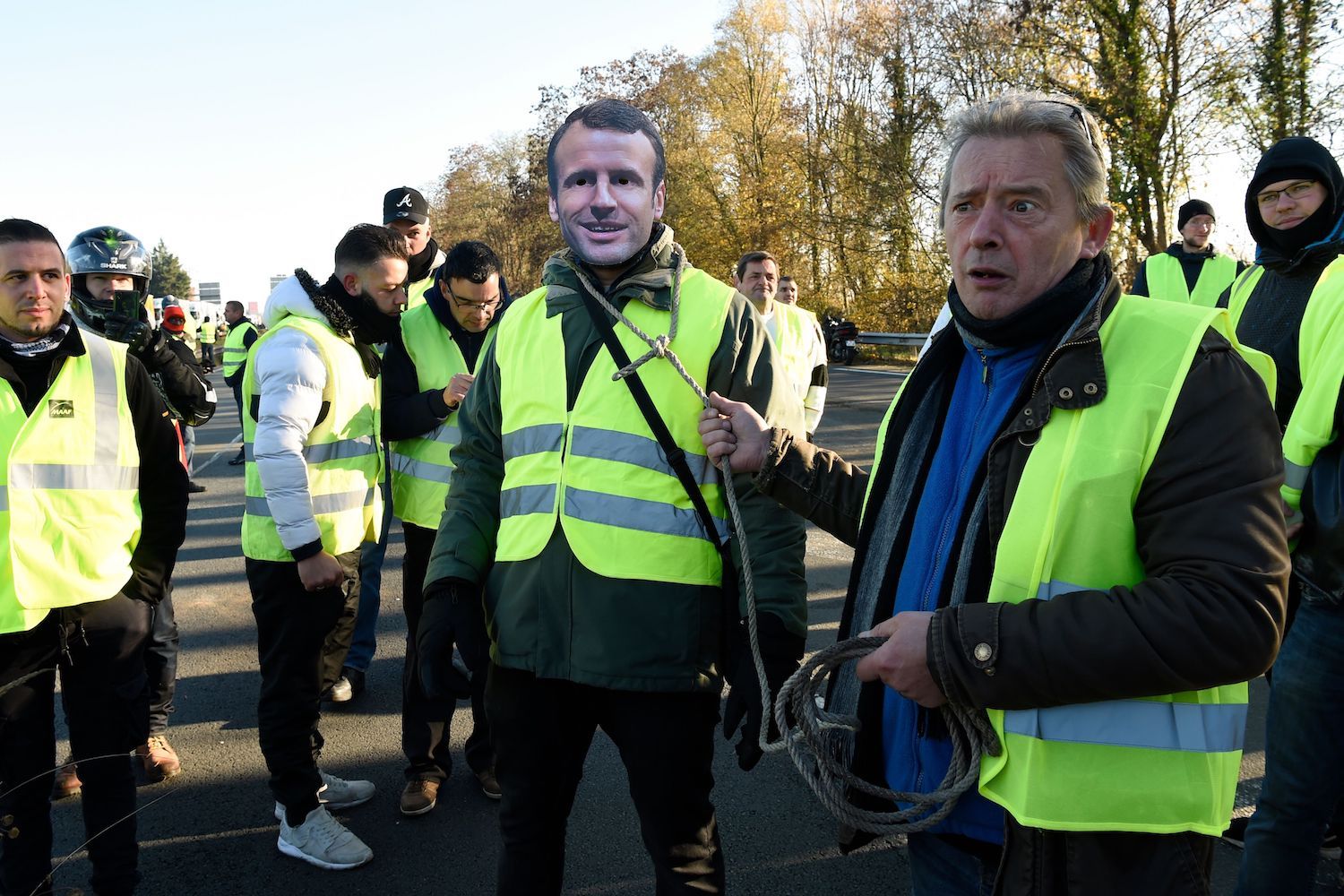 On Nov. 17, nearly 300,000 gilets jaunes—named after the reflective vests they wear as their uniform—took to the country’s streets and highways, airports and tunnels. Furious over the government’s plan to raise fuel taxes in January, they managed to block, usually with metal barriers, more than 2,000 entrance ramps, traffic circles, and bridges. The resulting perturbations were not just physical—along with major traffic snarls, there were more than 400 injuries and one death—but also political.

The following Saturday, what organizers dubbed as Act II took place. Rather than erect blockades across France, they made Paris the focus of their rendezvous. Though the government granted them permission to use the Champ de Mars, the great park bordered by the Eiffel Tower and Les Invalides, the protesters instead streamed toward another celebrated champ they had been expressly forbidden to enter: the Champs-Élysées. While the vast majority of the 8,000 or so gilets jaunes were peaceful, several groups of casseurs, or rabble-rousers, turned the historic and holiday-lit avenue into a battlefield with riot police. When the clouds from salvos of tear gas and flaming barricades finally cleared, the republic still stood, but the reverberations have left the government shaken—all the more so as organizers have already called for Act III come next Saturday.

Predictably, Macron and his ministers have pillaged the past in order to capture, or quarantine, the nature of this movement. In the days leading up to the protest, Macron warned the country against a “contemporary form of Poujadism.” The term refers to a populist movement that suddenly erupted in 1950s France and was led by Pierre Poujade, a small shopkeeper with big lungs from rural France. Anti-republican, anti-Semitic, and anti-tax, his cure for the ills that afflicted rural France was “Sortez les sortants,” or “Throw the bums out.” Despite a promising start in 1956, when it won several parliamentary seats, Poujade’s party proved to have a short life. In 2003, Poujade himself died in obscurity—so obscure that one gilet jaune joked that following Macron’s remark he had to look up Poujade’s name in a dictionary.

Though Macron claims to “understand the anger” driving these protests, he also seems as intent on condemning the gilets jaunes as comprehending them. The same might be said of Bernard-Henri Lévy, who made a historical comparison of his own. In an article for his journal, La Régle du jeu, this ubiquitous left-wing intellectual suggested that the riots of Feb. 6, 1934, anticipated last Saturday’s events. On that fateful night, several extreme right-wing nationalist movements, most notably the Action Française of Charles Maurras, combined and marched on the Chamber of Deputies. Fearing a fascist coup, the government responded with deadly force; the ensuing street battles left 16 protesters dead and thousands wounded. For Lévy, the slogans of 1934 and those of 2018 are eerily similar—the former with calls to march on the Chamber, the latter calling to march on the Elysée Palace—and unsettling. This is a moment and mentality, he concluded, that can give “birth to monsters.”

Yet other politicians and commentators have reached even further back in history, citing the jacqueries, or rural uprisings, that periodically flared up in medieval and early modern France. Named after Jacques, a popular name reflecting the commoners who engaged in these rebellions, the greatest jacquerie was the “Great Fear” of 1789, when vast ribbons of the French countryside erupted in deadly bursts of violence aimed at tax offices and local landowners. Yet, while such comparisons are suggestive, they are hardly dispositive. In this case, the French phrase “comparaison n’est pas raison” is apt. Today is neither 1934 nor 1789, and the gilets jaunes are neither Poujadists nor fascists.

Who, then, are they, and what does their protest portend? It is difficult to say for at least two reasons. First, unlike these earlier movements, which were led by influential figures such as Poujade and Maurras, the yellow vests lack a leader. There is no single figure representing, much less directing, the movement. Instead, hundreds of individuals organized the protests at local and regional levels. The case of Villefranche-de-Lauragais, a town near Toulouse, is typical. Early in the morning of Nov. 17, about 300 locals gathered in a designated supermarket parking lot. Sorting out assignments on a Facebook page titled “Blocage 17 novembre Toulouse,” they divided into smaller groups, each of which proceeded to block designated traffic corridors.

Second, not only is there no leader, but there is also no common list of demands. The hike in the gasoline and diesel taxes, meant to facilitate France’s transition to green forms of energy, has certainly enraged the vast majority of protesters. For many blue- and white-collar workers, for whom filling the tank ranks as the second most important item in their budget, this proved to be the final straw. These French workers mostly belong to “la France périphérique,” the label given by the sociologist Christophe Guilluy to those swathes of the population who, living in exurban or rural areas, depend exclusively upon cars. Not only have they been largely abandoned by the system of public transport, but they also feel abandoned by the state. As a recent BVA poll reveals, more than 70 percent of the rural population supports the gilets jaunes, while this percentage drops to 52 in the Paris region.

The green tax was thus the smoldering cigarette tossed into the growing pile of fiscal and social grievances. As one protester declared: “The tax was the spark, but there are so many other reasons why we are fed up.” These reasons vary wildly, including both hostility to the value-added tax and the popular perception that Macron represents the wealthiest 1 percent of the nation and not the remaining 99 percent. Macron has contributed to the latter impression through several tone-deaf public remarks since becoming president that have become known as “Macronades.” Whether it was his dismissal of critics of his liberal economic reforms as “change-resistant Gauls” or his advice to an unemployed French youth to “cross the street” and look for a job, Macron has repeatedly put his pied in his bouche.

It is difficult to measure the threat to the government posed by the yellow vests. Another historical analogy, America’s Tea Party, is telling. While the Tea Partyers hijacked the political agenda in the United States and stormed the primaries of an existing political party, the Republicans, to exercise their influence, the same outcome is unlikely in France. Though the leader of the conservative Les Républicains, Laurent Wauquiez, has expressed his sympathy with the new movement, both his party and the Socialists are treading very carefully. As for Macron’s own En Marche! party, fissures are beginning to appear. While the prime minister, Édouard Philippe, a former member of Les Républicains, has seconded Macron’s hard line, Jean-Yves Le Drian, the former Socialist who serves as foreign minister, recently warned that his colleagues needed to heed the suffering of this growing slice of the population. Predictably, the political extremes have met on this issue—but while Marine Le Pen’s hard-right National Rally party and Jean-Luc Mélenchon’s hard-left La France Insoumise have tried to co-opt the protest movement, they haven’t succeeded.