“Pour Out Your Wrath” 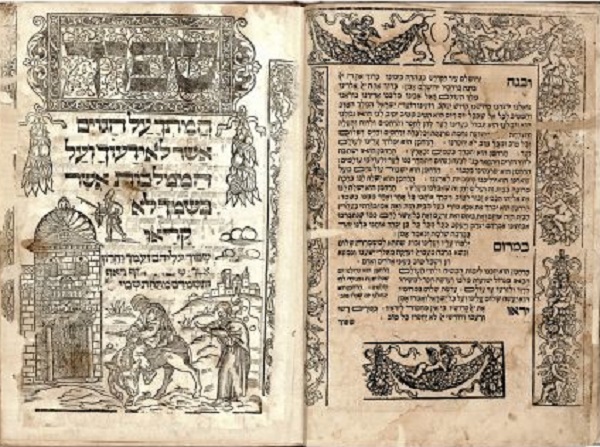 I was about to write an article about Pesach eve’ when I remembered that I wrote exactly the same article six years ago. So I am sending the old article again – I just have nothing to add.

I AM writing this on Friday night, the eve of Passover. At this moment, all over the world, millions of Jews are gathered around the family table, observing the Seder, reading aloud from the same book: the Haggadah, which tells the story of the Exodus from Egypt.

The impact of this book on Jewish life is immense. Every Jew takes part in this ceremony from earliest childhood, and plays an active part in the ritual. Wherever a Jewish man or woman goes in later life, they will take with them a memory of the warmth and togetherness of the family, the magical atmosphere – and the overt and subliminal message conveyed by the text.

Whoever invented the Seder (“order”) ritual, many centuries ago, was a genius. All human senses are involved: seeing, hearing, smelling, touching, tasting. It includes eating a ritualized meal, drinking four glasses of wine, touching various symbolic objects, playing a game with the children (searching for a hidden piece of Matzo). It ends with singing several religious songs together. The accumulated effect is magical.

More than any other Jewish text, the Haggadah forms the Jewish conscious – or, rather, unconscious – mind today, as in the past, influencing our collective behavior and Israeli national policy.

There are many different ways to view this book.

LITERATURE: As a literary work, the Haggadah is rather inferior. The text is devoid of beauty, full of repetitions, platitudes and banalities.

This may cause wonderment. The Hebrew Bible – the Bible in Hebrew – is a work of unique beauty. In many places, its beauty is intoxicating.

The peaks of Western culture – Homer, Shakespeare, Goethe, Tolstoy – are not its equal. Even the later Jewish religious texts – Mishnah, Talmud and so forth – while not so uplifting, contain passages of literary merit. The Haggadah has none. It is a text devised purely for indoctrination.

HISTORY: It’s not. Though it claims to tell history, the Haggadah has nothing to do with real history.

There can no longer be the slightest doubt that the Exodus never happened. Neither the Exodus, nor the wandering in the desert, nor the conquest of Canaan.

The Egyptians were obsessive chroniclers. Many tens of thousands of tablets have already been deciphered. It would have been impossible for an event like the exodus to pass without being reported at length. Not if 600,000 people left, as the Bible tells it, or 60,000, or even 6000. Especially if during the flight a whole Egyptian army contingent, including war chariots, was drowned.

The same goes for the Conquest. Because of acute security concerns, after being invaded once from there, the Egyptians employed a host of spies, – travelers, merchants and others – to follow closely the events in neighboring Canaan, in every single one of its towns and at all times. An invasion of Canaan, even a minor one, would have been reported. Except for the periodic incursions of Bedouin tribes, nothing was recorded.

Moreover, the Egyptian towns mentioned in the Bible did not exist at the time the event is supposed to have happened. They did exist, however, when the Bible was written, in the first or second century BC.

There is no need to point out that in a hundred years of frantic archaeological searching by devout Christians and Zionist zealots, not a shred of concrete evidence for the conquest of Canaan has been found (nor that the Kingdoms of Saul, David or Solomon ever existed).

But is this really important? Not a bit of it!

The Passover story does not derive its immense power from any claim to be history. It is a myth that grips the human imagination, a myth that is the basis of a great religion, a myth that directs the behavior of people to this very day. Without the Exodus story, there would probably be no State of Israel today – and certainly not in Palestine.

THE GLORY: One can read the Exodus story as a shining example of all that is good and inspiring in the annals of humanity.

Here is the story of a small and powerless people that rises up against a brutal tyranny, throws off its chains and gains a new homeland, creating a revolutionary new moral code on the way.

Seen in this way, the Exodus is a victory of the human spirit, an inspiration for all downtrodden peoples. And indeed, it has served this purpose many times in the past. The Pilgrim Fathers, the founders of the American nation, were inspired by it, and so were many rebels throughout history.

THE OTHER SIDE: When one reads the Biblical text attentively , without religious blinkers, some aspects gives us food for other thoughts.

Let’s take the Ten Plagues. Why were the entire Egyptian people punished for the misdeeds of one tyrant, Pharaoh? Why did God, like a divine Security Council, levy on them cruel sanctions, polluting their water with blood, destroying their livelihood with hail and locusts? And, even more gruesome, how could a merciful God send his angels to murder every single Egyptian firstborn child?

On leaving Egypt, the Israelites were encouraged to steal their neighbors’ property. It is rather curious that the Biblical story-teller, who was certainly deeply religious, did not omit this detail. And this just a few weeks before the Ten Commandments were handed down to the Israelites by God personally, including “Thou Shalt Not Steal”.

No one ever seems to have given much thought to the ethical side of the conquest of Canaan. God promised the Children of Israel a land which was the home of other peoples. He told them to kill these peoples, expressly commanding them to commit genocide. For some reason, He singled out the people of Amalek, ordering the Israelites to eradicate them altogether. Later, the glorious King Saul was dethroned by His prophet because he showed mercy and did not murder his Amalekite prisoners-of-war, men, women and children.

Of course, these texts were written by people living in times long past, when the ethics of individuals and nations were different, as were the rules of war. But the Haggadah is recited – today as before – uncritically, without any reflection on these horrible aspects.

Especially in religious schools in Israel today , the commandment to commit genocide against the non-Jewish population of Palestine is taken by many teachers and pupils quite literally.

INDOCTRINATION: This is the real point of these reflections.

There are two sentences in the Haggadah that always had – and still have – a profound impact on the present.

One is the central idea on which almost all Jews base their historical outlook: “In every generation they rise against us to destroy us”.

This does not apply to a specific time or to a specific place. It is regarded as an eternal truth that applies to all places, all times. ”They” is the entire outside world, all non-Jews everywhere.

Children hear this on Seder evening on their father’s knee, long before they are able to read and write, and from then on they hear or recite it every year for decades. It expresses the total conscious or unconscious conviction of almost all Jews, whether in Los Angeles, California, or in Lod, Israel. It certainly directs the policy of the State of Israel.

The second sentence, which complements the first, is a cry to God: “Pour out your wrath upon the nations that do not know you…for they have devoured Jacob and desolated his home…Pour out your wrath on them! May your blazing anger overtake them! Exterminate them from under the heavens of the Lord!…

The word “nations” in this text has a double meaning. The Hebrew word is “goyim”, an ancient Hebrew term for “peoples”. Even the ancient Children of Israel were called a “Holy Goy”. But over the centuries, the word has taken on another meaning, and is understood to refer to all non-Jewish individuals, in a very derogatory way. (As in the Yiddish song “Oy, Oy, Oy, / Drunk is the Goy.)”

In many translations, the word “exterminate” is changed into “pursue”.

To understand this text properly, one has to remember that it was written as a cry from the heart of a defenseless, persecuted people who had no means to take revenge on their torturers. To raise their spirits on the joyful Seder evening, they had to put their trust in God, crying out to Him that he should take revenge in their stead.

During the Seder ritual, the door is always left open. Officially, that is to allow the Prophet Elias to enter, if he should miraculously rise from the dead. In reality it was to allow the Goyim to look in, so as to disprove the anti-Semitic libel that Jews baked their unleavened Pesach bread with the blood of kidnapped Christian children.

THE LESSON: In the Diaspora, this craving for revenge was both understandable and ineffective. But the founding of the State of Israel has changed the situation completely. In Israel, Jews are far from being defenseless. We don’t have to rely on God to take revenge for the evils done unto us, past or present, real or imagined. We can pour out our wrath ourselves, on our neighbors, the Palestinians and other Arabs, on our minorities, on our victims.

That is the real danger of the Haggadah, as I see it. It was written by and for helpless Jews living in perpetual danger. It raised their spirits once a year, when they felt safe for a moment, protected by their God, surrounded by their families.

Taken out of this context and applied to a new, completely different situation, it can set us on an evil course. Telling ourselves that everybody is out to destroy us, yesterday and most certainly tomorrow, we consider the grandiloquent bombast of an Iranian bigmouth as a living proof of the validity of the old maxim. They are out to kill us, so we must – according to another ancient Jewish injunction – kill them first.

So, on this Seder evening, let our feelings be guided by the noble, inspiring part of the Haggadah, the part about the slaves who rose up against tyranny and took their fate in their own hands – and not the part about pouring out our wrath.