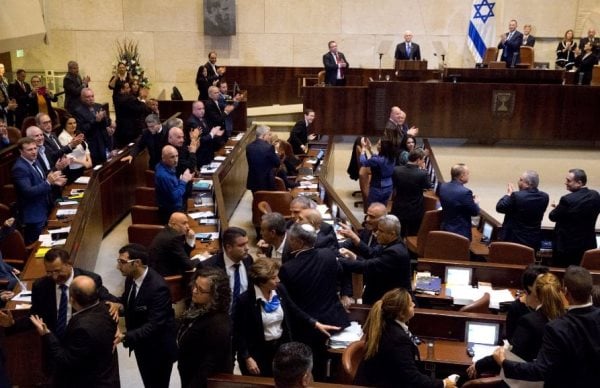 YEARS AGO, when I was a member of the Knesset, I decided to stage a demonstration in the plenum hall.

I put on a T-shirt with the slogan “Peace is greater than Greater Eretz Israel”. In the middle of the debate I took my jacket off, displaying the slogan.

After a few minutes, an usher approached me and said politely: “The Speaker would like to see you in his office.”

The speaker was Yitzhak Shamir, a former commander of the Lehi terrorist underground. He received me with a broad smile, asked me to be seated and said: “Uri, you have made your demonstration [demonstration point]. Now I ask you to take the t-shirt off and return to your seat!” Of course I did so.

I remembered this small incident this week, when something much more serious happened in the Knesset.

THE AMERICAN vice president honored Israel with a visit and was received like a king.

Why? Don’t know. To my mind, the man is a good-looking and well-dressed fool. Wherever he stopped, he made speeches that should have made even ardent Zionists blush. He lauded Israel in terms of childish adulation, heaping shameless flattery upon fake history.

Official Israel was ecstatic. No one reminded the public that the extreme Christian evangelism espoused by Pence has an unhappy end. It says that after all the Jews have gathered in the Holy Land, Christ will return to earth and all the Jews will convert to his religion. Those who don’t will perish.

The high point of the visit was Pence’s speech in the Knesset plenum. This in itself was curious. Such honors are reserved for foreign heads of state. Pence, as a mere vice, had no such right. But the Israeli government was set to flatter the man, who might one day become president himself.

(Actually, the only reason I can imagine for not throwing Donald Trump out is the frightening idea that Pence will become president.)

As a former Knesset member I was invited to be seated in the Plenum hall on this occasion, but of course I declined the honor. What followed was shameful.

When the vice president started to utter his chain of flatteries, the members jumped up and gave him a wild standing ovation. This was repeated again and again, up and down, up and down, and looked both ridiculous and disgusting.

Contrary to the US congress, the Knesset does not allow applause. In all my 10 years as a member, during which I attended every single session, I don’t remember a single hand-clap, not to mention multiple standing ovations.

After the guest’s speech, representatives of the parties had the right to respond. All the Jewish parties lauded the American politician wholeheartedly. No difference between coalition and opposition.

BUT THE really shameful scene came right at the beginning. When Pence started to speak, the members of the Arab United List stood up and waved placards protesting Trump’s recent recognition of Jerusalem as the capital of Israel.

The Knesset Guard seems to have been forewarned. In a split second, they set upon the 13 members of the list and evicted them forcibly. It was an ugly sight, made even uglier by the stormy applause from most Jewish members.

The United List is a combination of three Arab parties with widely divergent views – Communist, Nationalist and Islamist. They were compelled to unite when the Jewish majority enacted a law raising the minimum clause with the obvious intent of getting rid of the Arab parties, none of which had a chance of passing the minimum on its own. So they put up a joint list and became the third largest Knesset faction.

The entire ugly scene was quite superfluous. After a minute, the Speaker could have acted as Shamir did in my case – ask the Arab members to be seated after having made their point. But the present Speaker is no Shamir. He was a Zionist activist in Soviet Russia, with quite a different mentality.

FOR THE two million Arab citizens of Israel and the tens of millions of Arabs in the neighboring countries, the scene conveyed a clear message: the Arabs don’t really belong to the State of Israel.

The visual impact was unequivocal: all the Jews in the Knesset applauded the eviction of all the Arabs. It was a clear national divide, showing that the Arabs are strangers in the “Jewish state” – no matter how many centuries they have lived here.

The division is not so absolutely clean: the Arab list contains one Jewish communist, while most Jewish factions have one Arab member each. Popular humor calls them “Pet Arabs”.

This was not the end. On the very next day, the police announced that they were going to recommend that the three nationalist members of the United List be put on trial for breaking the party financing law.

Since parties represented in the Knesset receive state subsidies, the law prescribes what other donations they are allowed to receive. Israeli citizens are allowed to donate up to a certain maximum sum [could omit “sum”], donations from abroad are forbidden.

Now the police announced that the Arab national Party, Balad, had received large cash donations from abroad, disguising them with false documentation. The investigation, it was disclosed, has taken two years, with 140 persons interrogated.

Yeah? If so, why was the disclosure made exactly one day after the Knesset incident? Arab citizens and others are [I arbitrarily replaced “were” with “are” after the earlier suggestion in square brackets was not processed] compelled to believe that the disclosure was a penalty for insulting the US Vice President.

How vicious! How stupid!

BUT ARABS are not the worst [or “most unfortunate”] victims of this government. This role is reserved for the Africans.

Black people fleeing from Sudan and Eritrea have reached us for years after a long and painful trek, crossing the border between Sinai and Israel. In the end Israel built a wall and stopped the flow. But before that happened, about 35 thousand black Africans had reached Tel Aviv, where they settled in the poorest sections and soon quarreled with the locals.

The government built a special prison for them, but many had to be released. They were illegally employed washing dishes and such.

Now the Israeli government has made a secret agreement with the governments of Burundi and Uganda: for a payment per head, these countries will receive the immigrants. The victims themselves will receive a few dollars if they leave voluntarily. Otherwise they will be incarcerated indefinitely.

The decision raised a storm. It was generally assumed that in these African countries the lives of the refugees would be in danger, that they would be robbed, raped and killed, that others would try to reach European shores and be killed on the way.

The racist aspect was painfully obvious. Israel is full of foreign workers, from Ukrainians to Chinese. The Africans could easily displace them and do their jobs. But they are black. And they might – God forbid! – marry kosher Jewish girls.

And suddenly something completely unexpected happened: a moral uprising. After a rising tide of protests and articles, citizens spoke with a new voice.

Hundreds of pilots and other air crew called for airlines to refuse to transport the refugees from Israel to Africa. Many announced that they themselves would refuse to fly them. They swore not to be like the German locomotive drivers, who transported the Jews to their deaths in the extermination camps.

An elderly woman, a refugee [or “survivor”] from such a camp, announced on TV that she would hide any refugee seeking her help. She called on all Israeli women to do the same and hide refugees in the attics of their homes. That was a clear allusion to Anne Frank, who was hidden with her family in an attic in Amsterdam during the Holocaust.

There was a time when I could be proud to be an Israeli. Perhaps this time is returning.