Another US-sponsored coup in Iran or worse? 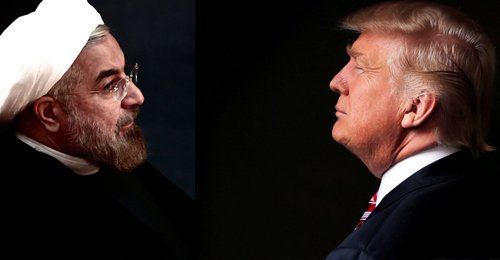 In his Twitter message late on July 22, United States President Donald Trump said the following: “To Iranian President Rouhani: NEVER, EVER THREATEN THE UNITED STATES AGAIN OR YOU WILL SUFFER CONSEQUENCES THE LIKES OF WHICH FEW THROUGHOUT HISTORY HAVE EVER SUFFERED BEFORE. WE ARE NO LONGER A COUNTRY THAT WILL STAND FOR YOUR DEMENTED WORDS OF VIOLENCE & DEATH. BE CAUTIOUS!” The original message was written in capital letters, which for social media users is like shouting instead of talking.

That was a strong answer to Iranian President Hassan Rouhani’s words earlier the same day. Rouhani said if Washington “continued to provoke” Tehran, Iran could shut down international oil shipments in the strategic Strait of Hormuz. “Do not play with the lion’s tail; you will regret it forever,” Rouhani had threatened Trump. “A war [with Iran] would be the mother of all wars.”

In today’s world, you can never be one hundred percent sure about what who can or will do to the other but in another tweet on July 23, Trump pointed at the fact that there was neither a nuclear test by North Korea nor a rocket launch as a success of his show of power-based diplomacy.

If it comes to that point, Iran knows that a confrontation with the U.S. would be an asymmetrical one. That means it is likely Iran may strike blows to pro-American countries in the vicinity, especially Israel and Saudi Arabia. Tehran also has the capacity to spoil or try to spoil any deal reached between the U.S. and Russia in Syria, as it has done before. Russia had to take Iran into the Astana process with Turkey when Iran demonstrated its destructive capacity in Aleppo in spite of the Russian stance.

Iran also has an influence on Iraq, thanks to the American invasion of the country, and thus has the capacity to make things worse in Iraq. It may also hit a few blows in Europe or even on American soil, which would disturb the security atmosphere there, but would hardly be sustainable.

On the other hand, Trump made quite an unusual threat by saying “a few throughout history have ever suffered before.” For example, the maximum amount of suffering that has been inflicted was when the U.S. dropped two atomic bombs on Japanese people in Hiroshima and Nagasaki in August 1945, killing around 225 thousand civilians to force the Japanese military to give in and end the Second World War. Did Trump mean a suffering of that sort in today’s world? I do not want to think so.

However, Iranian people have also suffered because of an American act before, right after the Second World War. It was the CIA, in collaboration with the British MI6, which toppled the elected Prime Minister Mohammad Musaddegh of Iran on Aug. 19, 1953. Musaddegh’s attempt to nationalize his country’s oil reserves from the British company had spoiled the interests of the two strategic allies. With the demand of British Prime Minister Winston Churchill, President Dwight Eisenhower had authorized Allen Dulles, the director of the Central Intelligence Agency (CIA), which had newly been founded in 1947. Dulles assigned the job to a team that had gained experience in two coup d’etats before.

The coup in Syria in 1949 was the CIA’s first involvement in toppling other governments. Miles Copland and Kermit Roosevelt (grandson of former U.S. President Theodore Roosevelt) were in charge. Copeland and Roosevelt had their hands in the 1952 coup in Egypt as they encouraged the Free Officers led by Mohammad Naguib and Gamal Abdel Nasser. Copland in the headquarters and Roosevelt in Iran carried out the coup with the support of Mohammad Reza Shah of Iran and street forces. The Shah gave his country’s oil rights back to the British and the Americans. The result was the first Islamic revolution in world history, which took place in 1979 in Iran. Stephen Kinzer’s 2008 book, “All the Shah’s Men: An American Coup and the Roots of Middle East Terror,” explains the event in detail.

Or did President Trump mean something worse than a coup to punish the theocratic regime in Iran?

In any case, history repeats itself for those who do not know to draw lessons from it.